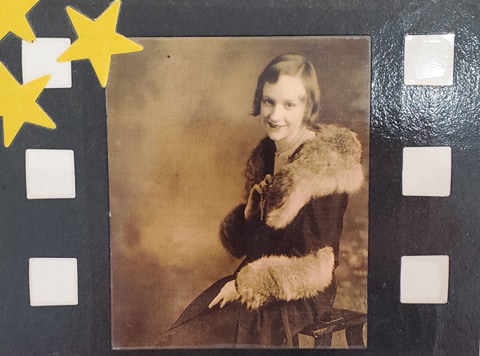 My Mom entered the world on January 25th, 1914. She was the last born out of nine children to Anna and Edward. Her Mother, Anna told her that she gave birth to her over the family owned Lyric Movie Theater in South Dakota. This really seemed to be the theme of my Momma’s life in her early years.

Because Mom was the last of nine, there was some question over what to name her. The family each put a name to their liking into a hat. As till grew closer to Mom’s birth, they draw out what was to be her moniker.  The name pulled from the hat was “Lucille Love,” submitted by her Father. When you think of it, the named screamed Hollywood. However, the chosen name was not to be. Her sister Edith was to put my Mom into a buggy and walk into the town to register Mom’s birth. Edith was not fond of the name, so she entered Cassandra Christine on her birth certificate. Mom would later take from both names, renaming Lucille Christine.

At the age of 6 Mom moved to Gardena, California. This was in 1920, during the height of Hollywood’s heyday. Her family was involved with movie theaters; from being owners, managers to projectionists. Movies were being filmed on the streets. It truly was a glamorous time. When Mom was ten years old she heard of a movie being shot in nearby Inglewood and decided to visit the set.  It was starring Marion Davies, a famous silent movie star; one of her favorites.  Mom watched for her opportunity. So, during a break in filming, she approached Miss Davies who was with her boyfriend, William Randolph Hearst the Newspaper tycoon and owner of Hearst Castle. Mom politely asked her for an autograph and a picture. Miss Davies was very sweet and agreed. Mr. Hearst asked my Mom if she would like his autograph as well. Mom looked him over and said no thank you. Miss Davies laughed as Mom walked away. Mom had no idea that William Randolph Hearst was famous in his own right.

Mom was a South Bay girl, attending Gardena High School. She was smart as a whip, but school seemed to be more of a social event. She had beautiful, shapely legs and was more than willing to show them off. Just before she entered school, she would roll her knickers up and her stocking down.

Mom was appointed a Hall Monitor at Gardena High School. Her duties were to pick up hall passes and absentee slips. She was very good at her job, perhaps a little too good. She would pick up all of the slips for the day, deliver them to the office, and leave through the door and right off the school grounds. Yes, as far as she was concerned school was done for the day. Off she would go to enjoy other off campus recreational fun.

As I mentioned before, Mom came from a long line of theater people. She started working in movie theaters when she was quite young. During this time, being an usherette was almost as glamorous as being a movie star. Movies would be double features in those days, and during intermission they would have entertainment, such as; dancing acts, singers, Vaudeville acts, organ music and featured spotlight girls. My Mom was an usherette and a spotlight girl. Only the prettiest girls were picked for this job. She would pose on the stage with a spotlight shining down on her. She also performed in a chorus line in a few local theaters. All the girls in the line wore black shoes except for my Mom. She wore white shoes because she was the lead dancer.

Some of the theaters Mom worked at was the Cairo Theater in Los Angeles and also at the Plaza Theater in Hawthorne. Mr. Grauman, of the famous Grauman’s Chinese Theater in Hollywood, asked Mom to come to work for him, but her brothers would not allow it, because they labeled Mr. Grauman as a “skirt chaser.”

My Mom loved to dance and often frequented the ballrooms in the area. The La Monica Ballroom on the Santa Monica Pier and the Rendezvous Ball Room at Crystal Beach, just to name a few. On occasion she would dance at the Catalina Casino or on board the gambling ships located in international waters off the Southern California coast. She lived a glamourous life, full of excitement.

The question to ask is, how did this glamourous city girl meet a country boy, fell in love and got married? Stay tuned.

My Mom was amazing. She always was patient, kind, and encouraging. She always was there for us and always had our backs. She taught me so much, not only by how she raised me, but also by example. I was very blessed to have her as my Mother. There was never a day that I felt unloved or unwanted. The song, “Wind beneath my Wings” would describe our relationship perfectly. I love you Mom. I miss you every day. Celebrate with Dad and the Angels. You did a wonderful job.