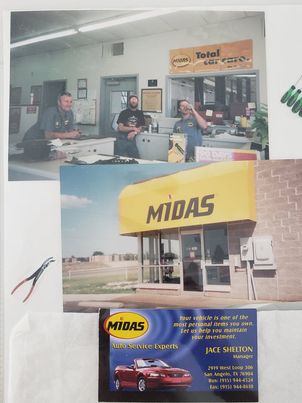 Time was closing in for my trip to San Angelo. I was looking forward to our time together with much happiness. Then came the phone call from my Jace*—-. Seems that he and his boss had gotten into a big fight. Jace*—- had approached him on the fact that all of the companies that his boss, or Gome as he would call him, had gotten in arears with the bills for the shop. The companies were now calling him continually for payment. Gome owned 3 Midas Shops. One in San Angelo which was the flagship store, making much more money than the other 2 together which were located in Midland and Wichita Falls. Gome was annoyed that Jace*—- called it to his attention, basically telling him that it was none of business. To which Jace*—- said, “You made it my business when they started calling me directly and even approaching me in public places.” Well from there on out one thing led to another and Gome threatened to fire Jace*—- if he didn’t watch how he was talking to him. So Jace*—- took matters into his own hands and told Gome that he quit. Gome told Jace*—- to cool off and call him the next day if he changed his mind. The next day came and Jace*—- did not back down hence finding himself unemployed.

Depression followed for Jace*—-. He found out that one of his friends, James had replaced him as manager. It didn’t seem like it was too easy for him to find a job. I think his depression played a big part in that scenario. Yet he was able to get a job at one of the car dealers in San Angelo as a Customer Service Clerk that wrote up shop tickets. Customers liked him and he knew many of them. One problem, Jace*—- would not up sale or over sale product or service to them if it wasn’t needed. The boss became aware of that and he lost that job. It was back to hitting the pavement. Then a few weeks later he called to say that he had a possible job at a Firestone Shop in San Angelo. He had to get a physical etc before he could be employed. That would run into the timing of me coming to San Angelo. He still wanted me to come, but it was up to me and he would not get upset if I changed my mind. Of course, I would still go and be with my Jace*—-. We would take care of these things together.

Soon I was on the planes to San Angelo, Texas with 2 large pizza’s in hand from Round Table Pizza. His favorite from when he had visited us. A few hours later there I was at San Angelo’s Airport. Who did I run into before I saw Jace*—-? Steve who was one of his Tech’s at Midas. He greeted me and said, “Good to see you, Cindy. You’re here to see Jace*? Jace*—- was at his happiest and best when you came to visit. It really is good that you are here. He’s been very down.” I hugged Steve and told him I would be there for Jace*—- and that I appreciated that he was such a good friend to him. Just about then Jace*—- came up to us and gave me a big kiss and hug. He then turned to Steve and gave him a hug too. They talked shop and friendship. They said their goodbyes and promised to stay in touch. Taking my hand into his, we were on our way.

In some ways, Jace*—- was his own worse enemy. At times like these he would be down on himself. In many ways he felt his job and work ethics defined his character and added to his sense of value. He was an extremely intelligent man as I’ve said before, and really, I couldn’t see him not ever succeeding in anything he put his mind to it. But when we are depressed, it takes us over unfortunately. But I was here now and hoped to lift his spirits and get him back to work. I hoped to let him feel good about himself again.

One thing for sure as the song says, “I do cherish you,” (my Jace*—-) and would do anything to make things better and easier for him.

Next Our time in San Angelo

Everything in this world, all that I’ll ever need

Is in your eyes, shining at me

When you smile I can feel, all my passion unfolding

Your hand brushes mine

And a thousand sensations seduce me ’cause I

I do, cherish you

For the rest of my life

you don’t have to think twice

I will, love you still

From the depths of my soul, it’s beyond my control

I’ve waited so long to say this to you

In my world, before you

I lived outside my emotions, didn’t know where I was going

’til that day, I found you

how you opened my life to a new paradise

In a world torn by change

Still with all of my heart until my dying day

I do, cherish you

For the rest of my life

you don’t have to think twice

I will, love you still

From the depths of my soul, it’s beyond my control

I’ve waited so long to say this to you