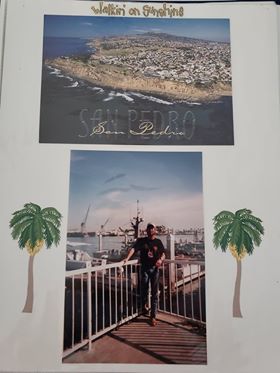 It’s late morning of the 26th of January. This will be our last day together until we can find another time that we can reunite some place, somewhere. Time goes to fast when we are physically together and way to slow when we are apart. It should be the opposite. I so look forward to our forever time when we will wake up with each other everyday for the rest of our lives. Parting is becoming increasingly more difficult.

It’s rise and shine time. I have so many things I want to show my Jace*—- in the South Bay and not very much time for him to see it all. I know my man loves his coffee. I bought a Mr. Coffee Maker Machine, just for this occasion. I only recently have become a coffee drinker. I get lattes at Starbucks and have never made coffee at home. So typical Cindy, do I ever read instructions? Of course not, how difficult could it be to make coffee? It’s just some water and ground beans right. I left my love upstairs to get ready for his big day in Cali. I went down to the kitchen and put water in the carafe and placed it on the hot plate of my Mr. Coffee Machine. I continued by putting coffee in the liner, in the basket. I turned it on and waited for the coffee to magically appear. Meanwhile, I go back up stairs to finish getting ready for our day together. I greet Jace*—- with a kiss and let him know coffee is in the works. About 10 or 15 minutes later we go down stairs. He sits on the couch and I go into the kitchen to check on the coffee. Strange, the water is still clear? I guess it takes longer to make coffee than I thought. I tell my man it should not be to much longer. Ten minutes later he is asking about the coffee? I explain I don’t know what has happened? It’s a new machine. Here is where we see the patient, loving, kind Jace*—-. He asks if I would like him to take a look at the machine. At this point I don’t have much of a choice, so I say yes. We walk into the kitchen and he takes one look at the machine. I see a slight smile on his face, as if to say ok, I see what’s going on here. Jace*—- turns to me saying, “Babe, I think we need to lift this up and put the water in here,” as he pours it into the Mr. Coffee Machine. Okay, there’s no getting around it, now I look like a real dummy. I mean everyone knows how to make coffee. You don’t need to be a rocket scientist. I look into Jace’s*—- eyes and apologize for my inadequacy. He looks at me lovingly and says never say your sorry for something that you should not apologize for. It’s no big deal, babe. It’s an honest mistake. I’m sure you were just tired and forgot. You see, my man, never, Never, made me feel stupid and always made excuses for me. He was always so good to me. We had our coffee and toast, his burnt like he likes it and mine barely toasted. Later we would laugh about the coffee.

We now are on our way to San Pedro. Jace*—- loves fish and loves fishing so I have decided to take him to Ports of Call. They have a huge fish mart with every kind of fish you can think of available. We drive through Palos Verdes on the way, where I explain that is kind of our rural area. He laughed so hard, but he does remark about how beautiful it is up there. Driving a little farther we now entered the parking area of Ports of Call. All of a sudden, with great excitement, Jace*—- says to me, “Love, there’s a Policeman, do you think I could take a picture with him?” I though to myself, that’s an odd request, but I will do anything for my man. I cruise up to the Police car and explain that my boyfriend is from Texas and would like to have a picture taken with him. Would that be alright? The Policeman smiled and said sure. I started to move my car to park when Jace*—- jumps out of the car before I could get into the space. Okay, I thought, what harm can be done in that very short few minutes? I parked my car, exit through the door, turned toward Jace*—- and he is standing next to the Policeman in handcuffs. Well, shit!!!! That was fast. What did Jace*—- do and how can I get him out of this? I approached consciously. Jace*—- and the Policeman are laughing. They seem to be having a good time. He introduces me to the Policeman, Jesse, and says babe take some pictures. Jesse agreed to putting me in handcuffs and to take some pictures with him. Well shit Howdy. That was so Jace*—- Everyone liked him. He made friends everywhere he went. We took the pictures and then the Policeman took off the cuffs. They shook hands and we were on our way to the fish mart. Inside, Jace*—- was like a little boy in a candy store. We must have spent an hour in there. He was fascinated to no end. We walked through Ports of Call looking at the shops. Which was fun.

We returned to the car and drove along the coast back to Redondo Beach. The sun was starting to set so we stopped along Torrance beach and watched it go down. It was a beautiful sunset. The rest of the night was pretty uneventful. We were hungry, so we ate at Outback Steak House for dinner. Driving back home we decided to get things ready for Jace*—- to go back to San Angelo the next day. After that the rest of the evening would be spent in bed making love to the most amazing lover and just holding on to each other hoping the next morning would never come.

Next  Another Good bye