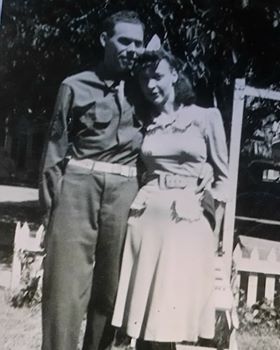 My parent’s married life during the War (WW2), put an unusual twist on it, as I am sure it did with many married couples at the time.

When they first were married, Dad was stationed here in Los Angeles, so there was time to be spent with each other. During this time Mom was helping out at the USO. Dad would stop in to spend time with his wife when time would allow him to get away from the camp. One such time, he walk in and saw Mom dancing with a soldier who was from his unit. He felt that this guy was paying a little too much attention to his wife. Bad move on soldier boy, as when he came back to camp he was assigned to KP in Dad’s Kitchen. He got pots and pans duty and well let’s just say that the soldier just couldn’t get the kitchen ware clean enough, lesson learned.

Shortly after their marriage they moved to Inglewood, California, my newly pregnant Mom, along with my sister Arletta had moved into what she would describe as a “cracker box” at 3713 Imperial Highway. It was a very small home on a long court of duplicate houses. It had one room only. In the room was a kitchenette and a bathroom. They had a small kitchen table. Each leg of the table was placed in a cup of water! Why you ask, because these houses were infested with bugs. Each time my mom would use an Insect Fogger or bug bomb, she would joke that you could watch the bugs exit the house and march right into the next house over. Because of the war they had no refrigerator. Each day they would walk to the store to purchase what they would have for dinner that night, with Food Ration Stamps. Meat was very hard to get as most of it went to the soldiers, but she always managed to have something tasty for their meal. Be what it may, my Mom was happy. She was back with her oldest daughter, had a baby on the way and was happily married to her soldier.

My Dad had a side line to help supplement his Army paycheck. When you have a wife, a step daughter, a baby on its way one must become creative. The servicemen loved to play poker and dice. Sometimes they just needed extra money to impress that girl. You have a demand; Dad gave the supply.

When the boys got their paycheck a poker game would start shortly thereafter. Dad usually would win a few bucks, sometimes their whole paycheck. The guys would then borrow the money back. For each dollar they borrowed my Dad received twenty-five cents in interest. A nice profit.

As time went on, the men became more in debt. Dad would stand right behind the paymaster with his hand out ready to collect the money due. Shortly after Dad would again lend them money. To Dad it was a business, he had a black book where he kept track of money owed and from whom. His bank was kept in a hidden drawer in a kitchen table.

Soon word got out of his “business.” The Army Chaplin approached my Dad and talked with him, pointing out that Gambling was ungodly and taking advantage of the men who struggled with this sin was a mark against him in God’s eyes. Next, came the M.P.’s who took Dad aside and warned him that his profit making was to come to an end immediately or he would be in big trouble. Dad made money while it lasted, but it was now as they say “a bust.”

It was not long after this that Dad was sent to Fort Bliss in Texas. Unfortunately, because of his new assignment he was not able to be present at the time of my sister Alanna’s birth.

Next week we learn more about Dad’s army days, marriage and mom’s pregnancy with the twins.