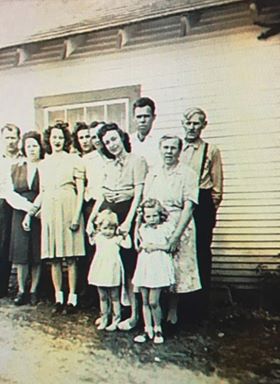 The war was declared over and Dad was state side. He was now base at Fort MacArthur in San Pedro, California, not far from home.  In no time Dad would be at the front door of their home ready to start a new life as a civilian. As with many of our servicemen, after the war Dad could not find a job in the Los Angeles area. So, after some conversation, the family moved to Olympia, Washington in hopes to find employment and stability. They picked up their belongings, their 4 children, packed up the car and were on their way.

My Dad given my Mom hope as he already had a house that he and his brother, Eddie, had been building next to his parents’ home. They had made it out of floating logs that had escape from a flume, at a local logging business. It sounded like a perfect solution to their dilemma. Dad was sure he would be able to provide for his family there. However, he neglected to mention to my Mom that the house was not completely finished. Dad had grown up with simple beginnings and he did not need much to survive. He had grown up in a sod house and his parents were primarily farmers. His Father had done other work on occasion to supplement for his large family.

You can imagine the surprise this little city girl felt, have coming from a totally whole different way of life, when they drove up to the house; four children in hand and there stood their home, walls unfinished, open framing, not to mention no indoor plumbing. Talk about culture shock. Mom had recently read the book, “The Egg and I,” shortly before moving to the farm. From the pages of that book, somehow, she had come to glamorized farm life. She actually was a little excited about the whole possibility of life on the farm. After moving in, she faced the harsh reality when she had to cook on a wood burning stove and pump water that came from a well. One perk was that the pump was actually in the kitchen, a modern convince in the area. She would have to wash diapers for 3 little ones on a washboard and having to hang them in the rafters in the attic, because in Olympia it rained or snowed all but 6 weeks of the year. Once the children were potty trained, life would become a little easier, for it was off to the outhouse located toward the side of the house in the yard. Yes, this little city girl had some adjusting to do.

Dad is the tallest man with his arms around my Mom’s waist. Mom is holding Alanna’s hands.

Dad had decided to farm raspberries, pumpkins and a few other vegetables to provide for the family. He would sell them by the roadside and to neighbors. He even could sell to the local canning company at times. They also grew selected produce for family consumption. Mom would learn how to can various vegetables and spend many hours canning their food. She became very good at it and quickly learned how to survive on a farm.

Olympia was a special kind of cold, my Mom would say; “You could feel the cold in your bones.” She was gifted an old mink coat from a family relative who gave it to her to keep her warm while doing outside chores. There was a cow on the farm Mom decided to name Tangerine, after a song that was popular, that she liked to hear at the time. Unlike the song, Tangerine was not very pleasant or a friendly cow, for when the cow saw Mom come out to the field, it would chase her around the farm. Imagine the neighbors seeing this tiny city girl being chased in a mink coat by a cow. That had to be quite the sight. No matter how unfriendly Tangerine was, she was necessary, for Dad would milk her each day to provide milk for the children. Tangerine would later have a calf which Mom would name May Time after another song she enjoyed. Mom and the kids grew to love this little calf who had a much better disposition than her mother. But one day the calf disappeared from the farm only to reappear on the dinner table. Times were hard and they needed food. It was a sad time as Mom and the kids had looked at the little calf more as a pet than something that would become necessary to feed the family. My siblings, would not eat it, after they unfortunately saw our Dad pull its body wrapped up in butcher paper from the car, as they realized it was May Time. They also raised hens for eggs and an occasional chicken dinner. One of Mom’s job would be to collect the eggs. The one resident rooster of the chicken coop, was not very friendly and not at all happy with the idea of Mom taking the eggs from his hens. He would peck and chase her around the hen house, strutting around after she exited his domain. He would become very vocal of his victory. They also had pigs and goats to also help to provide food for the table.

Farm life was an ongoing experience for all. Mom learned, weathered on. We all loved life together for that it was all about.