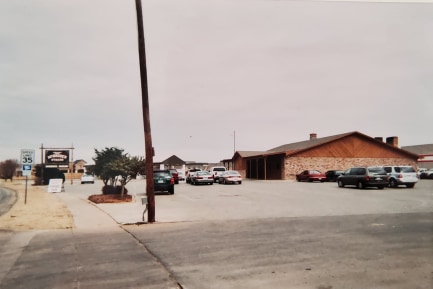 Our phone conversations were something I looked forward to each day.  I couldn’t wait to hear his voice. Often, he would be the last voice I heard before I went to sleep. And here I was face to face with the love of my life, it made our relationship that much stronger and real. I felt so blessed.

After a shower and a shave, he was ready to take “his girl” out to dinner. Tonight, we would go to the local steakhouse. McBride Land and Cattle Co. established in 1946. It was a local favorite. They offered hand cut selections of beef cooked over mesquite wood. Dinner was just as good as it sounds. We drove up and Jace*—- being the gentleman that he was/is came to my side to help me out. We walked arm and arm into the restaurant. I was so proud to be with him. He pulled my chair out, placing the napkin on my lap. I had never been so well taken care of. He sat directly across from me and as we opened the menu, he told me to order what ever I would like. He was charming, polite, good company, generous and so much more. I hit the jackpot. I ordered the petite Fillet Mignon, with steak fries and a salad. His choice was the largest steak that I have ever seen, a baked potato and a salad. It really amazed me how much he could eat and still maintain that nice body of his. We laughed, talked and enjoyed our food.  It was a wonderful dinner.

While eating I got this sense that he was always aware of his surroundings. He would glance at the door every time someone would enter the restaurant. I let the thought go because I was too wrapped up in the moment. Being in Jace’s*— presence. He had such a big effect on me.

After dinner, as we started to drive away from the restaurant, Jace*—- told me that we were going to go for a ride, he wanted to show me around the town that had helped mold him into the man I loved so dearly. The places he took me would remind me of the stories that he had told me through our many phone conversations. First stop was a drive by his Mom’s home. It was nice, kept up neatly and had a brick front. Although, this was not the house he lived in as a child growing up. As we drove by, I tried to get a glance into the back yard. See, I was trying to see that infamous hot tub. There was a funny story behind that tub, let me tell you. A few years back, Jace*—- had to have surgery. As he put it, a rhinoplasty to ream out his sinus cavities. He mentioned that it was a pretty rough few days of recuperation. From what he told me it was painful and they had given him some strong medication. Seems that one late night he was restless and had trouble falling asleep. He decided to step into the backyard for a bit of fresh air, hoping it would be just what he needed to clear his mind and allow him to finally sleep. In fact, it was quite the opposite. To his surprise, when he lifted his head to look outside, there was his Mom’s husband, freshly out of the hot tub, naked as can be standing right in front of Jace*—- for all to see. He quickly looked into his Mom’s husband’s eyes.  Jace*—- said of his encounter, “that only bleach could cleanse his mind of that vision and what age had done to that man’s body was a disturbing sight.” I don’t think he ever quite got over it. Lol

Next, we were on to the golf course that was across the street, a block or so down the way. It was there that his he and his best friend snuck out of their homes through their bedroom windows late at night to “find their way into the golf course.”  They would head to the ponds where they would jump in and recover golf balls. The next morning, they would return to the scene of the crime, where they turned in the balls getting $.10 each. It was a way for them to make a little spending money. It was a long-wet night of work and he never did explain to his mom how his clothes got wet.

The final leg of his drive was where he worked for a while as a mechanic. The name of the place was Danny’s Shell Gasoline Station. It was there he made many friends and got a large following of customers. Being the fun-loving guy he was, he started up a tradition, having a barbeque every Friday night after work in the parking lot. Customers, coworkers, and friends alike would drop by with their choice of meat. The collective of people nicknamed the gathering, “Buck’s Place” and even had a sign made up. Some of Jace’s friends called him Buck. It was a good time by all.

We chatted up on our way back to the motel. I started to get butterflies in my tummy, getting a little nervous the closer we got. Looking back, I guess I felt a bit awkward. I’ve never really felt that I am attractive or sexy, just average. When other girls knew how to use their feminine ways and finesse to get a man into bed, I felt more like a bump on a log. I was questioning everything way too much. Was I supposed to initiate the first move? Was he even in the mood? Did he enjoy being the aggressor? I was stumped.  After an amazing first night, I didn’t want to mess things up by doing the wrong thing.

When he opened the door to the room, I made a beeline the bathroom. In there, I kind of mulled around like a nervous bride on her wedding night. After more than a few minutes, there was a knock on the door, “Hey, is everything okay in there?” OMG, it was show time and I didn’t even know my lines! I opened the door to a concern and quizzical look on Jace’s*—- face. I gave him a sheepish look and shrugged my shoulders saying “I was freshening up?” He smiled, chuckled a little, then moved in for the advance. “Did I tell you how beautiful you look tonight?” I looked down, still so shy. In fact, he had told me more than a few times. He put his finger under my chin, lifted my head up, met me with those amazing eyes of his and with a cute little smile, he went in for the kiss. A long, deep and passionate kiss that took my breath away.  He was so good at that.  And that’s all it took to put my mind at ease. All of my fear, anxiety, uncertainty, well, it disappeared right there in his arms. See, Jace*—- always knew me better than I knew myself. He read me like a book, but in a good way. He would way lay my fears. I knew I was forever safe with him. The next moments were not a fit of passion. No, I wasn’t ready for that given my history. Instead it was a gentle desire, the need to be held close and to express our love and pleasure for each other. And so, it began, another night in heaven.