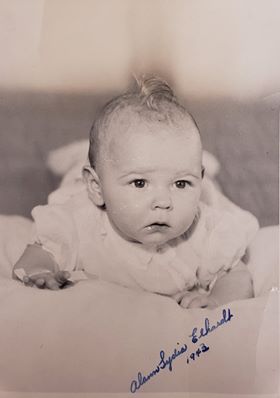 Dad was still in the Army doing his service time during World War 2. The marriage was going well, but they did not get to spend much time together. However, they did have enough time to create my sister Alanna.

Mom got pregnant shortly after their marriage. Her pregnancy went well, but she was very tiny. My Dad was away in the service most of this time, but she was fortunate enough to have her 10-year-old daughter Arletta there to help her out. They passed the time away making baby clothes and diapers for the expectant baby. Arletta was very excited and could hardly wait to meet the new baby. My Mom when into labor May 1st . After arriving at Rose Maternity Hospital in Los Angeles, in Angeles Mesa District she continued being in labor for another 6 hours. Her labor was long, but the delivery was not complicated. On Sunday, May 2, 1943 at 10:42 p.m. Mom gave birth to beautiful baby girl, my sister Alanna. She weighed 5 pounds 10 ounces and was 19 inches in length. She had brown curly hair. My Mom stayed in the hospital along with Alanna for 10 days as was the custom in that time period. Unfortunately, even though my Dad was still stationed in California he was unable to get a pass during this time to be present for her birth.

Mom brought her beautiful baby home to a house that they rented in Los Angeles, California at 1761 ½ Cotner Avenue. It had a large walnut tree that spread over the top of the house. You could hear the walnuts fall on the roof. Squirrels were always fun to see playing by the tree and eating the nuts. They lived there for only a short time when they moved to the “cracker box” on Imperial Hwy in Inglewood, which was mentioned in the former blog.

Alanna soon got a nickname, which was Bunny. This name stayed with her threw her toddler stage and until she entered school. She was given this name because she was born 10 months after Mom and Dad got married.

Dad came to visit whenever he could get a pass. He always enjoyed his time with the family. Mom and Arletta enjoyed their new baby, Alanna, taking her for walks in the stroller and sitting outside under the tree. Mom and Arletta looked back on those times very fondly. They also continued to sew clothes for the growing baby, this being where Arletta learned how to sew.

Next week Mom we hear about the twins and more of Dad’s Army days.