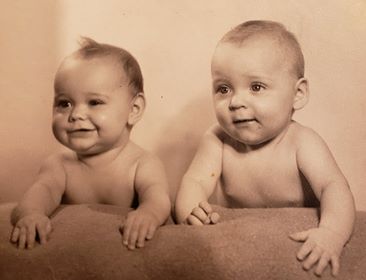 Mom, Lucille, was a little thing only 5 foot 5 inches and probably weighing in around 105 pounds. So, when she got pregnant in 1944 at the age of 30 years it was quite the surprise that she would give birth to twins. She already had 2 daughters, Arletta 12 years and Alanna 1 ½ . Mom’s husband Albert was in the Army, serving as a Mess Sargent in World War II. He would not be home for most of the pregnancy and not in attendance for the births. He was scheduled to take leave to serve time in the Hawaiian Islands. He would sail for the Island on November 11, 1944, less than 3 years after the bombing of Pearl Harbor.

Mom got bigger being all babies, early on in her pregnancy. The Doctor detected 2 heart beats in the 5th or 6th month of gestation, and Mom became aware that she would be giving birth to twins. This was unusual in her family as there had been no twins born to her knowledge in at least the last 2 generations. This opened a whole new experience for her and the family, as they planned for twins. It of course meant that they needed 2 of everything. Alanna was still in her crib, Arletta was sharing the bed with Mom and now 2 more little ones all in a “cracker box” in court of homes in Inglewood, California. It would be a challenge to house 5 people in there. An opportunity came from Mom’s ex-husband’s Howard’s, parents, offering her to stay in a home that was just 2 doors over from where they lived in Los Angeles, California. Offer excepted, they moved to 1525 82 Street, shortly after she found out that she would be having the twins. The home had a large living room, small kitchen and 2 bedrooms. It had a large front yard and a small backyard with an Avocado tree. They would continue to live in this house until they moved to Olympia, Washington. This would also be a comfort as the Stockton’s were very kind people and would be very helpful during Mom’s pregnancy. Rachael Stockton was a nurse so she could keep an eye on Mom. Also, they both loved children so they often had the children over to their home.

Mom’s pregnancy was going relatively smoothly until she reached her 7th month. She became so big in the uterus holding the twins that her tiny frame had trouble standing without tipping over. After falling on her face, she was put into the hospital for the last months of her pregnancy on complete bed rest. Arletta and Alanna would stay with the Stockton’s in their home during this time.

November 3rd, 1944 the two little bundles of joy were born in an Army Hospital delivered by a Captain, located in Redondo Beach at the time. Henry would be born first, followed approximately 5 minutes later Janice would make her entrance. Mom would often say that Janice, kicked Henry out of the womb because she wanted it all to herself, joking of course. They both weighed in at a little over 5 pounds each. Mom often said after the birth of the twins that she had to have twins in order to get her boy. Dad would not be able to be in attendance for the birth of the twins. He was to leave for Hawaii on November 11th and they would not give him a pass. Mom and the twins would stay in the hospital for 10 days which was customary in those days.

Back in those days there was no ultra sounds, because of that Mom and Dad did not know if they would have 2 girls, 2 boys or hopefully a girl and a boy. Now came the big decision on what to name the twins? Did they want matching names or rhyming names, like Henry and Henrietta, Janice and Janet or Henry and Harvey.  A few names came to mind. Not knowing if they would have two girls, two boys or one of each, they picked out two girl names, two boy names and would draw from those in case there was a girl or boy. Dad wanted to name a boy Henry in honor of his brother that had died at 27 years old. But in case they had 2 girls Henrietta would then become one of the girl’s names. The second girls name would be Janice, which was Mom’s choice, naming her after a friend of her’s little girl. The little girl was very shy and oh so cute. James was the second name of choice for a boy. We don’t know why this name was chosen, as there is no James in either family. After the birth of the twins they decided on the names Henry Albert, the middle name after our Dad and Janice Racheal after Rachel Stockton. The difference in spelling would be to once again honor my Dad taking Al from Albert. Janice got the nickname GiGi because it was had for her to say Janice once she began to talk.  Henry’s nickname became Hank.

Planning for the addition was a happy one as all were very excited and Dad was ever so proud. Mom’s family would give her a twin’s shower providing 2 of everything. This helped out the little family very much and Mom was forever grateful. She would mention it throughout the years following. So, when she came home after the twin’s birth everything was set up for the twins. This was indeed very helpful for the family.

Mom and Arletta would enjoy taking the twins out for a walk in their buggies. But it was sometimes a contest to see which of them would get to have Janice in their buggy. One-time Arletta put the babies in their buggies for mom. One in a pink blanket and the other in a blue blanket. However, Arletta pulled a switch and had Henry in pink and Janice in blue. It wasn’t until they went out for the stroll and someone wanted to see the babies did Mom find out. They both got a good laugh about that one.

It was a delight to have the two little ones added to the family. There were always good times.