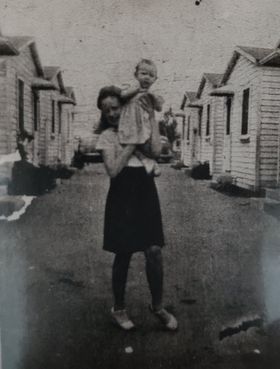 Arletta was a teenager when she arrived at Olympia, Washington to live with our Mom. When my parents left for Washington, a few things had to be worked out between Arletta’s Dad and our Mom so that she could join us. I guess you might saw that the once she was able to live with us, Arletta found that she enjoyed the most were the Army dances.

The Army dances were held two times during the week. They would be held at two different locations, North Fork and South Fork. The Army boys would get paid at the first of each month for their service. At the beginning of the month one of the soldiers would come calling in a taxi to pick Arletta up at the farm to take her to the dance at the Fort. The young man and Arletta would spend the evening together dancing and talking. Eventually the dance would come to an end. It was then the young man would hire a cab to take them back to the farm. He wanted to spend as much time with her as he could. Who wouldn’t after all it was my darling sister Arletta? He also wanted to see her home safely and was hoping for a goodnight kiss. Unfortunately, the soldier would have spent his whole paycheck on Arletta, so he would dismiss the taxi say his goodbyes and then walked 8 miles back to the Fort. But to be with Arletta was well worth it.

As the month went on the soldiers would have spent all of their money, so Arletta would catch the bus to the dances. Our soldier boys had their own way to locate Arletta at the dances. They had their own signature songs that they would request the band to play. This was their way of letting Arletta know that they were at the dance and were looking for her. Very convenient I would say as at times more than one would be in attendance. Walter was from Tennessee. His song was the “Tennessee Waltz.” He would hope that Arletta would hear it and waltz right into his arms. Once in a while there would be more than one of her soldier boys at the dance. Tennessee Waltz (Walter) showed up at the North Fork dance he usually went to the South Fork dances. As he saw Arletta come in he had the band play his signature song. Arletta found her way to him and was on his arm when “Slow Boat to China” was played. Immediately, she knew another one of her fella’s was there. Arletta turned to Walter and said, “Oh gee, there is someone else here I know I should say hi too.” Walter accepted this as the guys knew that she dated other fellows. Arletta had two men on her arm and they totally understood. They were just happy to have her attention.

During Halloween week the Fort had a costume dance. Arletta was quite the hit when she walked in dressed as Night and Day, themed after the song, “Night and Day, You are the One.” One side of her costume was black with stars on it and the other side was white. It was an original and made by our Mom. Mom was quite the seamstress. She taught Arletta how to sew. Arletta later became the Head Dresser at the Mark Taper Forum in Los Angeles, California.

Night and Day You Are the One

Night and day, you are the one

Only you beneath the moon

Whether near to me or far

It’s no matter, darlin’, where you are

I think of you night and day

Night and day, why’s it so

That this longing for you

Follows wherever I go

In the roaring traffic’s boom

In the silence of my lonely room

I think of you night and day

Night and day, under the hide of me

There’s an, ooh, such a hungry yearning

Burning inside of me

And this torment won’t be through

Till you let me spend my life making love to you

Day and night, night and day