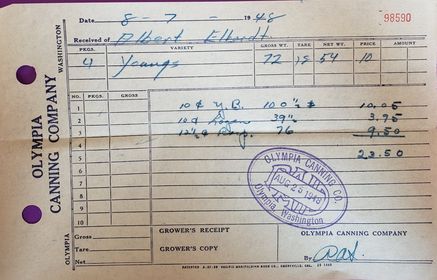 As I wrote previously, my Mom was a city girl from California and my Dad was a farm boy. They came from two completely different life styles. When Mom went to live on the farm with my Dad, many of the things that she was use to wa not available on the farm, such as running water, indoor plumbing, neither a gas or electric stove just to name a few. Mom was a trooper though as she learned to adjust quickly. When they arrived in Olympia, Washington they came with three children in diapers and not much money.

Dad as I mentioned wanted to be a farmer, which had worked for his parents, but times were different after the war. Crops took time to grow. Dad wanted his main crop for the purpose of selling to be raspberries. He also had a small area of blackberries and Logan Berries. But these were all seasonal. Quite frankly, what was sold was not enough to carry them over for the whole year. So, because of this, my Dad, God bless him, took on several jobs over the few years we lived there. None of them were long term or steady until the last year or so of their time on the farm. One of the first places where Dad and Mom both worked was at the Olympia Cannery.

The Olympia Canning Company was established in the Port of Olympia around 1912 and took up an entire block between A and B Avenues. The company employed many girls and women, some as young as 11 or 12. The company was here until 1959. Although they had work year-round, most of their employees where hired for seasonal work. Usually during harvest time. The Olympia Canning Company was a multi-purpose operation, canning different items as seasons changed. In the summer months it processed fruits and vegetables, including string beans, apples, pears , strawberries, prunes, loganberries, squash, and even huckleberries. Some of the seasonal work was the (peeling pears by hand, operating apple peeling machine, etc.)  In winter production shifted to seafoods, mainly oysters and clams.

Soon after its closing, the Seamart store opened in the aging building. One of the earliest mega-grocery stores, it evolved into a funky combination of cut-rate goods, amusement rides and arcade. The store was a favorite for youngsters and, later, Evergreen students looking for bargains, or just a way to get out from the rain (although some fell through the leaky roofs). Seamart and its successor Yardbirds store closed in the late 1980s. In 1999 a three-alarm fire destroyed the vacant building.

The minimal money that was made there helped the little family of 5 to fill in expenses that could not be covered by the crops and eggs that they sold by the road. Dad actually sold some of his crops to the Olympia Cannery as well. This provided food that they could grow or harvest on the farm. Because my siblings were so young, they grew out of their clothing fast, so it had to be replaced by larger sizes. Then there was seasonal weather and that required different types of clothes that they need. Even though times were had, my parents never complained and all of us never felt poor or under privileged. We were happy and the family was strong. We also were blessed to have extended family around all the time.  Life was good.