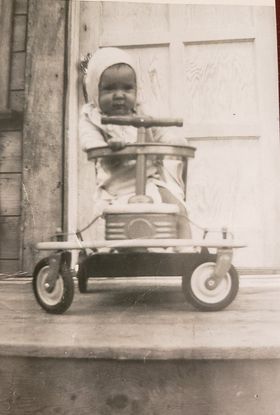 This week’s blog is a little out of sequence. Most of the writings up to now has been “before Cindy” (me), because I’m the baby of the family and we have started from the beginning of the family. So why now? My sister Alanna, saw a picture a stroller like the one I had as a toddler and said, “You should write about your Go Go.” I told her that would be a great idea. Here it goes:

My Mom was working at the State Capitol when she became pregnant with me and my Dad was working at Capitol Chevrolet. Money still wasn’t the best, but we were making it.

After my birth, somewhere along the first 6 months or so, my parents got me my “Go Go.” What’s a Go Go? My Mom had a way of giving  names for objects or functions to make it either more practical, less embarrassing, or just plain easier for us to communicate. Hence the name Go Go for my stroller. After all, if the stroller came out that did mean we were on the “Go.”

I’m not for certain, but I think that they most likely purchased my “Go Go,” better known by its brand name as a Taylor Tot at Montgomery Wards. My reasoning behind that was because in researching different ledgers, papers etc we have found that they had credit with this store. When doing research on the web I found that the cost of this Stroller in 1959 was $11.28. Mine was older than that, being purchased in 1950, so I’m sure it wasn’t quite that expensive. But it gives you some sort of idea of how much they would have had to pay for it.

For a little history on the Taylor Tot it was not just any stroller…it was the premiere baby stroller of the 20th century. It seems they were made from the 1920’s till the 1970’s. The company was the Frank F. Taylor Company of Cincinnati, Ohio.

In addition to strollers, the company made tricycles, doll carriages, wagons and bicycles. A stroller patent was granted in 1931. The Smithsonian Museum of American History has a catalog and price list in its collection. The stroller was apparently very popular.

By the fifties the handle had developed imaginatively, and was not only removable, but also formed a second seat, behind the first, which was useful for another toddler, or for a bag of groceries.

It seems that today, they have become quite the collector’s item. They are listed for sale all over the internet. For some reason the old Airstream Trailers come to mind in comparison. People buy them, then either restore them or totally redesign the insides. Seems like they do the same with the Taylor Tot.

My Go Go was MY pride and joy. It represented fun, freedom, adventure and seeing things that I may have never seen before. It was after all my wheels. The only clear memory I have of MY Go Go, unfortunately does not show me in my best light. You will see why I put “MY” in caps after you read this recollection of the event.

This is a picture of me on our front porch in Olympia, Washington in my Go Go.

Eventually my Go Go traveled with us on the train back to California when we moved there in 1951. We were living in the house on Haas Avenue in Gardena. Mom got all of us kids ready for an outing, where to I’m not sure. I had to be under 2 years of age so not all details are clear. We walked to what is now the intersection of Redondo Beach Blvd and Van Ness Avenue. We were waiting for the light to change. I remember my siblings remarking about how hot the ground was on their feet. I don’t remember how big the intersection was then, but I believe it had 4 lanes. At the best having 3 children at the ages of 8 and the twins 7, and a toddler in a stroller crossing a main intersection would not be the easiest. Unfortunately for my sibs and my poor Mom I did not help in the least. As the light changed my Mom told my sibs to climb aboard the rubber covered railings on the bottom of my stroller and off we would go across the street. Well, I didn’t like to share MY Go Go, so I cried all the way across the main street in protest. My sibs all hanged on for dear life and my Mom God Bless her with great patience, continued the quest in record time, reassuring me that it was alright. We got to the other side of the street safely. I got over my pout. My sibs were the better for not having to go across the blacktop. I look back at that time and feel so sorry for my Mom and sibs. So, in the end of this story comes my apologizes for being a spoiled brat. I love you all dearly and given the chance in my old age if I at some time get a Rascal Scooter, I will give you a lift anytime with a smile on my face.